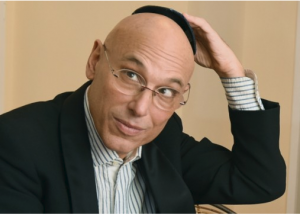 Terry Swartzberg (born on July 22, 1953 in Norwalk, Connecticut) is an American PA (public affairs) campaigner and journalist. He is based in Munich, Germany. He wrote for 25 years to the International Herald Tribune. He is especially known for his work for the Stolpersteine and for his “reality check” – since 2012 he has been wearing a kippa in public.

Swartzberg grew up in New York prior to moving with his family to Bihar, India, where his father, a meandering cultural anthropologist, researched village life and Indian wedding feasts on a long-term basis. While in India, he attended a Jesuit boarding school, where he became – temporarily – a good Catholic.

After studying at (and dropping out of) Brandeis University and in Paris (wine-tasting and fencing), he transferred to the University of Wisconsin-Madison, where he earned that fine institution’s first and last B. A. in Asian Urban Studies. In 1976, he became – quite by accident – an investigative journalist in Hong Kong. He spent the following years roaming around Asia and getting into all sorts of predicaments.

He followed that up by becoming editor-in-chief and only staff member of Green Revolution, possibly the worst hippie publication ever produced (and that’s saying a lot), and teaching creative writing in a maximum-security penitentiary in Minnesota.

In 1980, he blundered his way into Berlin, probably the only city in which he would ever be considered normal, and where he launched his long-term relationship with the International Herald Tribune. In 1985, he moved to Munich, where he has lived since.

Since 1999, Swartzberg has been managing director of and resident cook for Swartzberg GmbH. This PA agency stages campaigns to save the climate (for the United Nations and the EU), for the remembrance of the Holocaust, for fostering understanding among religions, for the eradication of warfare and other easy-to-achieve causes.

Originally a libretto commissioned by Leonard Bernstein, Swartzberg’s play Tzaddhik is based upon the Torah’s principle of humanity’s being saved by each generation’s having 36 righteous persons. It uses slapstick comedy, stirring music, litanies and anything else that works to shows how humanity repeatedly incites itself to kill.

On December 1, 2012, Swartzberg embarked upon his experiment of wearing a kippa outside of his home and of the Jewish community. His objectives are to counter antisemitism and to ascertain how Germany’s society really feels about Jews. Disproving predictions to the contrary, all of his experiences have been positive. His “civil courage” led to one of his kippot’s being selected for inclusion into the German government’s Museum of German History in Bonn.